Further to the recent unrest and strikes in Spain, in one of many attempts to crack down on illegal pirate operators, taxis and private hire vehicles will now be recognised by rear blue number plates 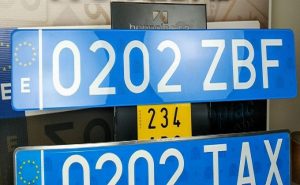 Vehicle owners will have up to a year to change their number plates, but can do so immediately.

This change is driven by the approval in 2016 following the increase of intrusion and piracy in the public transport sector. The proposal was approved unanimously and the Government has been urged, at the request of the collective of taxi drivers, to carry out the necessary actions in the shortest possible time, to modifying the traffic regulations (Annex XVIII of the General Regulations of Vehicles) relative to the registration plates in order to provide a specific colour (blue) for the licence plates.

Some European Union states such as the Netherlands, Belgium and Greece have already introduced this type of different licence plate.

5 years since we had snow – but it was so much fun!