“A scenario in which the UK leaves the EU without agreement (a ‘no deal’ scenario) remains unlikely given the mutual interests of the UK and the EU in securing a negotiated outcome.

Negotiations are progressing well and both we and the EU continue to work hard to seek a positive deal. However, it’s our duty as a responsible government to prepare for all eventualities, including ‘no deal’, until we can be certain of the outcome of those negotiations.

For two years, the government has been implementing a significant programme of work to ensure the UK will be ready from day 1 in all scenarios, including a potential ‘no deal’ outcome in March 2019.

It has always been the case that as we get nearer to March 2019, preparations for a no deal scenario would have to be accelerated. Such an acceleration does not reflect an increased likelihood of a ‘no deal’ outcome. Rather it is about ensuring our plans are in place in the unlikely scenario that they need to be relied upon.

This series of technical notices sets out information to allow businesses and citizens to understand what they would need to do in a ‘no deal’ scenario, so they can make informed plans and preparations.

This guidance is part of that series.

Also included is an overarching framing notice explaining the government’s overarching approach to preparing the UK for this outcome in order to minimise disruption and ensure a smooth and orderly exit in all scenarios.

We are working with the devolved administrations on technical notices and we will continue to do so as plans develop.

This guidance explains the additional documents you would need, as well as your driving licence, to drive in the EU after 29 March 2019 if the UK leaves with no withdrawal agreement.

Your driving licence is valid in the EU. As long as you hold a UK licence, you can drive for both work and leisure purposes throughout the EU without other documents.

You do not need to re-sit your driving test. 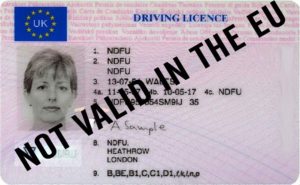 Your driving licence may no longer be valid by itself when driving in the EU.

If you move to another EU country to live, you may not be able to exchange your licence after the UK has left the EU.

What you would need to do

Driving in the EU

If there is no deal with the EU, you may need to obtain an International Driving Permit (IDP) to drive in the EU. An IDP is a document which when carried with your driving licence means you would be able to drive outside of the UK including in EU countries. There are different types of IDP. Which one you need depends on which country you are driving in.

If you currently drive outside the EU, for example in some states of the USA and countries including Japan, you may already be used to obtaining an IDP.

You may be turned away at the border or face other enforcement action, for example fines, if you don’t have the correct IDP.

You may also need an IDP to hire a vehicle when you are abroad.

There are 2 types of IDP required by EU countries. Each is governed by a separate United Nations convention.

One type is governed by the 1949 Geneva Convention on Road Traffic.

The other type is governed by the 1968 Vienna Convention on Road Traffic.

The version of the IDP you would require depends on which EU country you are visiting and whether it is party to the 1949 or the 1968 convention.

Each type of IDP is valid for a different period.

After March 2019, if you visit and drive in an EU country, for example on holiday, you would need both:

You would need both types of IDP if you are visiting EU countries covered by different conventions, for example France and Spain.

You would need both a driving licence and an IDP whether you’re driving in a private or professional capacity.

You can currently get the 1949 type IDP over the counter at around 90 Post Offices or by mail order from 2 private companies. This mail order service will cease on 31 January 2019.

From 1 February 2019, the government will begin providing IDPs. From this date, you will be able to apply for both 1949 and 1968 types of IDP at 2,500 Post Offices across the UK. We will announce which Post Office branches will offer IDPs in early 2019.

Currently getting an IDP over a Post Office counter takes around 5 minutes on a turn-up-and-go basis.

IDPs issued under the 1949 convention will be valid from the day of issue shown on the front of the document.

If you already have a 1949 convention IDP you can continue to use it in all countries in which it applies (including EU countries) for as long as it remains valid. However, from 28 March 2019, when the 1968 convention comes into force for the UK, that convention will govern the arrangements for driving in most EU member states, plus Norway and Switzerland.

When travelling outside the EU, if you already have a 1949 convention IDP that expires after 28 March 2019, you should check whether it will still be valid in the country in which you are planning to drive, as the 1968 format IDP will replace it from this date. Affected countries include Cuba, Jamaica, Turkey and Vietnam.

Moving to or living in the EU

You can avoid this by exchanging your UK driving licence for one from the EU country you move to or live in before 29 March 2019. UK licence holders who do this, will be able to re-exchange for a UK licence if they return to live in the UK.

We will be seeking to negotiate a comprehensive agreement with the EU to cover the continued recognition and exchange of UK licences after exit.

EU driving licence holders, visiting or living in the UK after exit

After exit day on 29 March 2019, arrangements for EU licence holders who are visiting or living in the UK would not change.

For visitors, with driving licences from EU or non-EU countries like the USA, Canada, Serbia, Japan and New Zealand will enjoy the same arrangements as today. The UK does not require visiting motorists, for example those coming to the UK on holiday or who wish to drive on business, to hold a separate IDP to guarantee the recognition of their driving licence.

When non-EU licence holders come to live in the UK on a temporary basis, we would continue to recognise their licence for a period of 12 months, before requiring the holder to either exchange their licence, where agreements exist, or to take a driving test.

EU licence holders, who passed their test outside the EU or EEA have restrictions on licence exchange, and so may need to take a test to obtain a UK licence. See exchanging a foreign driving licence.

We will publish more information in the coming months. We aim to give businesses and individuals as much certainty as possible as soon as we can, and to ensure that any new requirements are not unduly burdensome.

This notice is meant for guidance only. You should consider whether you need separate professional advice before making specific preparations.

It is part of the government’s ongoing programme of planning for all possible outcomes. We expect to negotiate a successful deal with the EU.

The UK government is clear that in this scenario we must respect our unique relationship with Ireland, with whom we share a land border and who are co-signatories of the Belfast Agreement. The UK government has consistently placed upholding the Agreement and its successors at the heart of our approach. It enshrines the consent principle on which Northern Ireland’s constitutional status rests. We recognise the basis it has provided for the deep economic and social cooperation on the island of Ireland. This includes North-South cooperation between Northern Ireland and Ireland, which we’re committed to protecting in line with the letter and spirit of Strand two of the Agreement.

The Irish government have indicated they would need to discuss arrangements in the event of no deal with the European Commission and EU Member States. The UK would stand ready in this scenario to engage constructively to meet our commitments and act in the best interests of the people of Northern Ireland, recognising the very significant challenges that the lack of a UK-EU legal agreement would pose in this unique and highly sensitive context.

It remains, though, the responsibility of the UK government, as the sovereign government in Northern Ireland, to continue preparations for the full range of potential outcomes, including no deal. As we do, and as decisions are made, we’ll take full account of the unique circumstances of Northern Ireland.

Norway, Iceland and Liechtenstein are party to the Agreement on the European Economic Area and participate in other EU arrangements. As such, in many areas, these countries adopt EU rules. Where this is the case, these technical notices may also apply to them, and EEA businesses and citizens should consider whether they need to take any steps to prepare for a ‘no deal’ scenario.”