News just in via Metovalencia 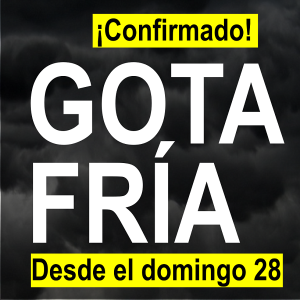 There will be “cold drop” from this Sunday 28th January. Its final position and direction will determine where it will rain more, for how long and with what strength and frequency.  But as they say “Forewarned is Forearmed” !!

The Gota Fria or Cold Drop , also called in DANA meteorology (isolated depression in high levels) or low segregated, is an annual meteorological phenomenon that usually coincides with the beginning of autumn in the western Mediterranean . It is experienced particularly in Spain and more specifically along the east coast and the Balearic Islands , although its effects can be felt in inland areas as well. Broadly speaking, the cold drop is the result of a cold polar air front ( jet stream ) moving slowly over Western Europe at high altitude (normally 5-9 km) and that, when hitting the warmest and wettest air of the Mediterranean Sea , generates strong storms . With the term cold drop is designated in meteorology to a limited volume of cold air in the high levels of the atmosphere , which in a meteorological chart is represented surrounded with closed isotherms .   (Wikipaedia)

Minions – The Rise of Gru In English at Cine Jayan

Elvis in English at Cine jayan