HOLIDAYMAKERS ARE ARRIVING AND THE SCAMS ARE STARTING

Police recommend removing rental stickers or signage from cars, regardless of whether the companies themselves approve, and keep all valuables out of sight, locking bags and other items in the boot if leaving the vehicle unattended.

AND THIS IS WHY 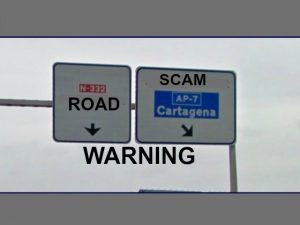 We hear this time and time again but here we go once more with this year’s warning about drivers on the AP-7 motorway being targeted by thieves who flag them down after claiming to have seen a flat tyre on their rental vehicle.

The scammers signal drivers to pull over and then, once stationary, the thieves distract them and steal their belongings.

One driver explained explained that a man in the front passenger seat was pointing at her front tyre and pointing to a service station ahead. After stopping, her friend got out to look and a man came over speaking loudly in broken English. They all then gathered round the passenger side tyre but there was nothing at all wrong with it.

She later realised he had been talking loudly so we the doors were not heard to be opening and closing. She added that one of the man’s friends had sneaked over and removed their bags while they were distracted.

When she reported the incident to police she was told they had seen the ploy “one, two, maybe three thousand times before.”!

The Season of Goodwill – and Covid Passes

The Valencian Covid passport: when and where it will be mandatory