The long road south – a motorhome route through France to Spain

Tips from Out & About Live

You may be surprised at how many motorhomes from northern Europe travel to campsites in Spain for the winter. Some go for up to six months from October onwards, some prefer to spend Christmas at home and travel out in January.

So how do we all get there? Broadly speaking from the UK you have three options.

a) Ferry to the north coast of Spain and drive south to your chosen Costa.

b) Short crossing to northern France, motorways to Perpignan, then the Spanish AP7 coastal motorway to your destination.

c) Short crossing but drive across country through France and Spain.

The pros and cons of these options would take an entire article and there are many who have good reason for their choice. For some option C is the only contender. I don’t like the Bay of Biscay in winter, nor paying to use expensive motorways. We are off on a long winter stay, so a few extra days driving are insignificant and part of motorhome enjoyment is the journey itself. Okay, it’s winter and may be raining, or worse, but you get to visit towns and tourist sites without the summer crowds.

Over the years we’ve fine tuned our route so that, as far as possible, we avoid toll motorways, heavy trucking routes and roads passing through endless villages with low speed limits, speed bumps and traffic lights. We’re driving a big vehicle on the wrong side of the road, so avoiding city centres is also preferable. Then, after a few hours’ driving, it’s nice to stroll around where we’ve ended up, which brings us to the issue of where to stay.

French campsites are mostly open in the summer, and motorhome aires available all year. The letters pages suggest some of you are not convinced about using them, I simply suggest, give them a fair trial. In over twelve years we’ve had no problems, if it doesn’t feel right move on. Most of the aires included in this route have paved parking suitable for poor weather and are close to village or town centres for shopping and restaurants. If you prefer to stay on campsites, few are open in winter, so your route and driving time will be dictated by those that are. Also campsites are often in remote rural areas and may not have hard standing.

Our route starts at Calais, but it can easily be joined from Dieppe or Cherbourg. Basically we need to get past the Pyrenees and driving over the inland passes in winter is risky. Mountain roads are also very slow and if your destination is Valencia or further south there is little saving in overall mileage compared to the much safer and faster route along the Atlantic coast near Biarritz. Mileages where quoted are approximate, road signs in kilometres can seem very high, just remember 50km is 30 miles, 100km is 60 miles, etc. 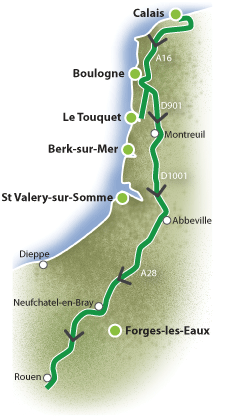 As you leave the ferry terminal stay on the main road, don’t turn into town unless you intend staying on the aire near the harbour. At the A16 junction turn right towards Boulogne and stay on this free motorway for 24 miles to junction 29 just before the peage. Leaving the motorway you drop down a hill. If under 3,500kg go straight on, otherwise the inside lane swings right down to a bridge, after which you turn left to bring you back, through the commercial area, to the main road. In under a mile the road forks; if you intend staying on one of the coastal aires follow the D940; otherwise the D901 via Montreuil is faster. Either way, the destination is Abbeville where, just north of the city, you pick up the free A28 motorway, which takes you all the way to Rouen.

To find out where to stay during stage 1 – click here

Over many years we have not found a sensible alternative to bypass Rouen, they either add too many miles or progress is frustratingly slow. Our route only involves one major junction so, outside rush hour, traffic should be reasonably light. The motorway becomes dual carriageway at the city’s edge and drops down through a tunnel. Leave this in the inside lane and in just under a mile take the third exit signposted to Vernon. The slip road ends in traffic lights where you need to be in the centre lane to turn left across a dual carriageway. 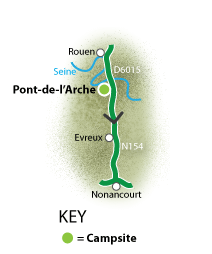 You should now be in the right hand lane for the next set of lights. Go straight on and then bear right onto the D6015 still signed for Vernon. In a short while, the Seine appears to the right and you are clear of the city. Continue to Pont-de-l’Arche where you cross the river and keep going, still on the D6015, for 4miles to a round-a-bout. Go straight on and in just 500 yards take the slip road towards motorways and Evreux. Cross the A13 motorway and continue onto the free A154 motorway which soon becomes the N154, a fast dual carriageway, taking you past Evreux to Nonancourt where you meet the N12.

To find out where to stay during stage 2 – click here 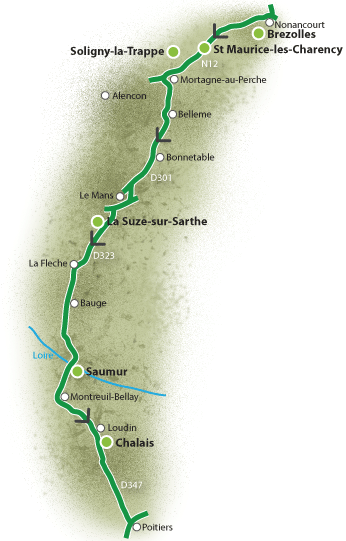 As you approach the N12 the map, and probably your navigator, will suggest turning left past Dreux and Chartres to meet the N10. However this is a busy slow trucking route and takes you right through Tours, where believe me, you don’t want to be.

So instead turn right on the N12 towards Alencon, leave most of the traffic behind, and enjoy the mainly fast dual carriageway for 34miles to Mortagne-au-Perche where you turn south. But don’t enter the town, which is busy and narrow. Continue on the N12, for another three miles and take the second exit. Turn back under the main road, across the round-a-bout and at the next take the first exit on the D401.

Follow this for 2.5miles to the D938 which you follow southwards past Belleme and then as the D301 past Bonnetable towards Le Mans. Just before Le Mans as you leave the village of Savigne-l’Eveque turn left onto a link road towards the A11 / A28 motorway junction.

Continue straight on to seamlessly join the D323 southern bypass and in 7.5 miles turn south, still the D323, to La Fleche and on to Bauge and Saumur. Cross the Loire and follow the fast D347 past Montreuil-Bellay and Loudun all the way to Poitiers.

To find out where to stay during stage 3 – click here

You join the Poitiers ring northwest of the city and leave it just four miles later on the N10. From here to Bayonne is 256 miles but it’s a fast dual carriageway virtually all the way with only Bordeaux having heavy traffic. Routes to avoid it go too far inland and are slow, so stick with it. You join the bottom of the A10 motorway for the free section towards the 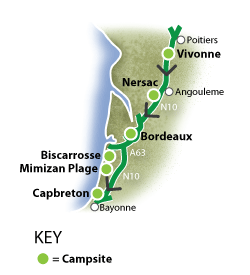 If you intend staying on the city campsite then watch for airport signs to go anticlockwise north, otherwise continue clockwise to the free A63 motorway. In 15miles you can either turn onto the A660 towards Arcachon and the coastal beaches or continue for another 13 miles when the free A63 suddenly changes back to the N10. This final stretch towards Bayonne now has toll points which are difficult to avoid unless you go out to the coast. At the bottom of the N10 you can either continue on the A63 toll motorway, or take the D810 towards Bayonne, Biarritz and the Spanish border.

There are many aires along the coast south of Bordeaux and many motorhomes only come this far for the winter. If the weather is reasonable we can recommend a few nights stop for some cycling or beachcombing. However if you encounter very strong winds remember it’s a forest area on light sandy soil, parking under trees may be ill advised.

To find out where to stay during stage 4 – click here

Stage 5.  Bayonne and into Spain. 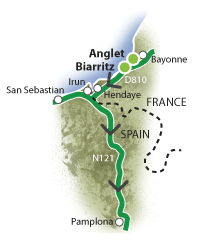 Most trucks will have taken to the motorway but the road is still quite slow through a continuous urban sprawl. You will be almost unaware of crossing the border at Irun, watch for the Espania sign, and turn south on the N121 a surprisingly fast road wriggling through the mountains to Pamplona.

If the weather is good there are two low altitude passes you can take instead. These are prettier than the coastal sprawl but the narrower winding roads mean no mileage saving and a longer journey time. Just before Biarritz, take the D932 due south to Cambo-les-Bains. From here either turn towards Ainhoa to cross the border, or continue on to St-Jean-Pied-de-Port where you enter Spain and climb to a 1,000m over the Ibaneta Pass. Either way you end up in Pamplona.

To find out where to stay during stage 5 – click here

From Out and About Live

Have a safe and enjoyable journey!