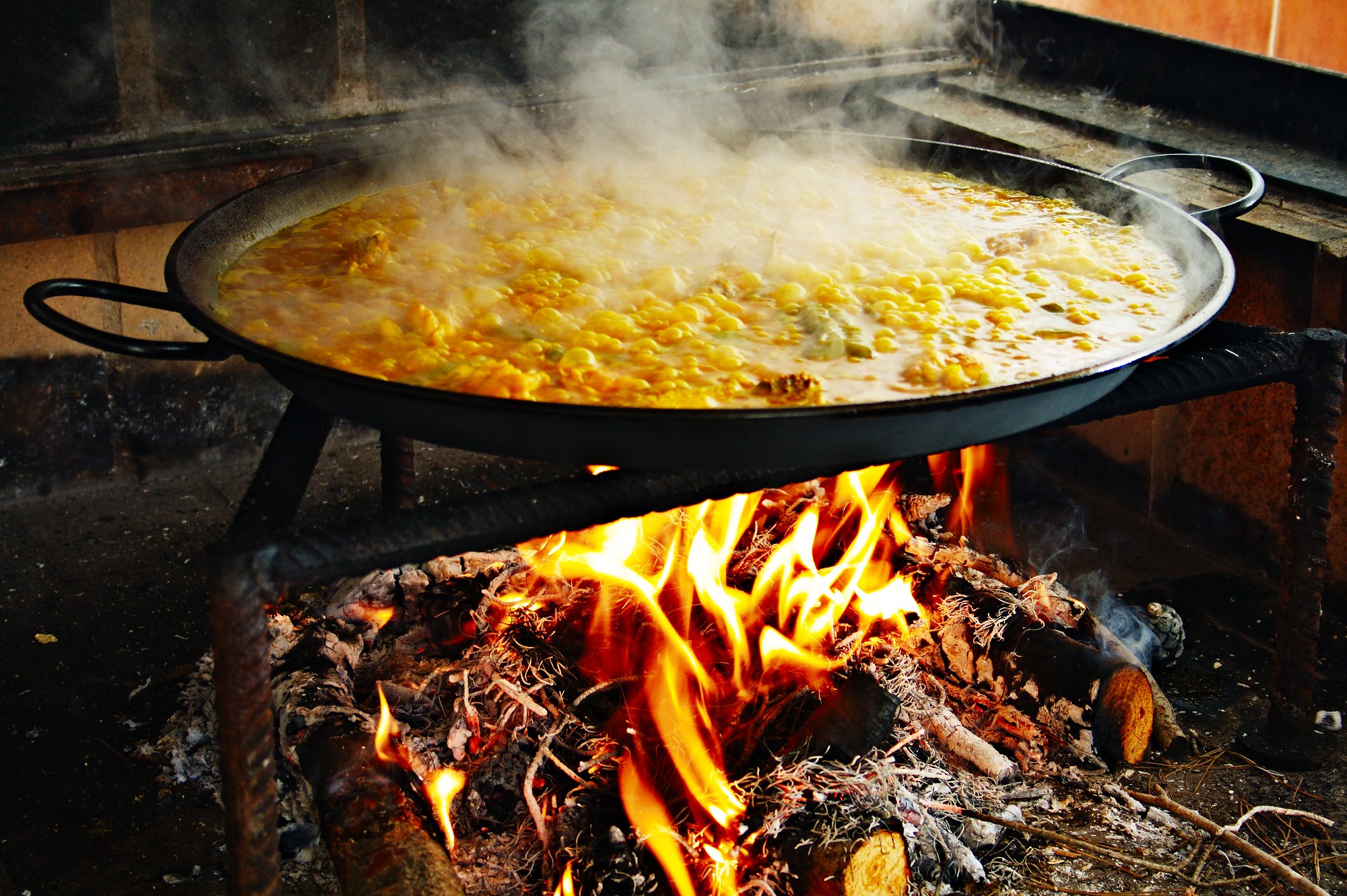 Described commonly as a Spanish rice dish that includes different combinations of vegetables and meats, characteristically seasoned with saffron, but also has other spices depending on the recipe and area in Spain that it comes from.

So I thought I would go look for a little more information on this dish which I used to make according to how I thought it should look and taste but never really knew for sure until I took a lesson with Carmen Alesanco a couple of years ago. She taught me exactly how she makes it but even her version differs from the squillion or so recipes you can find  when asking how to make the perfect paella.

OK, so a bit of history first…

Paella is said to to be a perfect union between 2 cultures, the Romans for the pan and the Arabs that brought the rice. There is an old story of how the Moorish kings’ servants created rice dishes by mixing the left-overs from royal banquets in large pots to take home. ( See I always thought it was the Spanish answer to Bubble and Squeak) 😉

It is told that that word paella originates from the Arab word “baqiyah” meaning left-overs but the term Paella actually seems to refer to the pan that it is cooked in. All the way back to the ancient Sanskrit language the term Pa means …to drink, and from the Roman culture, latin words like Patera, Patina, Patella which could mean a container to drink from or cook with. It seems a very natural dish to make, since rice is grown in Spain, plus meat and seafood in some regions are plentiful.

Most experts do, however, agree that the dish was developed in the Spanish city of Valencia and many people say the best and most authentic Paella still can be found and tasted in and around Valencia.

The Paella pan is characterized by being round with a flat bottom.
The pan can be anywhere from around 12 inches in diameter to several feet. ( Sorry I still can’t follow Bonaparte and his new fangle measurements!) The one thing that doesn’t seem to change is the height. It is about “first joint in the thumb deep” as the Spanish would say, so that the rice has maximum contact with the bottom of the pan.

Why the dimples in the pan ?

Good question. I had no idea and did not really question it… until now….. Well, the dimples serve several functions. They trap small amounts of liquid and promote even cooking, they make the pan rigid and prevent warping. They’re also a nostalgic reminder of the days when paella pans were hand hammered. Some people claim that the dimples keep the rice from sticking to the pan, but ( ahem) that don’t always work and to be honest, in my opinion, the bits that stick to the pan are the best bits!!!. Rice sticking to the bottom of the pan is not something most diners want to avoid, as it makes for the tasty, crunchy “socarrat”  ( the crusty bottom layer of rice)

According to tradition in Valencia, paella is cooked over an open fire, fueled by orange and pine branches along with pine cones..

Two types of rice of Spain is small rounded medium size grains that absorb the flavors and stock well, but keep their shape.  The most popular rice is Bomba rice.

The Meats and Vegetables

Depending on the region in Spain , the meats and vegetables added to the Paella vary. Paella can have several meats or none at all, there are a few of the traditional ones such as rabbit, chicken, snails and Spanish smoked sausage like Chorizo. Then I was also told that Chorizo should NEVER be cooked in a paella!! Seafood ingredients can be prawns, mussels, clams, lobster and crab. On special occasions, 18th century Valencians used calderos to cook rice in the open air of their orchards near lake Albufera. Water Vole meat (not commonly found in Mercadona now!)  was one of the main ingredients of early paellas, along with eel and butter beans.

Vegetables
Onions and garlic are a must, (although then I was also told no onions as they produce too much fluid!) Very often you will see fresh peas or beans as a garnish.
Artichoke quarters and red bell peppers are often used.

Saffron is seen on every Paella recipe that I have looked at. It gives subtle flavour and obviously that super colour. And, of course, a little Olive Oil.

Paella is served family style in Spain, on a round table with the pan in the centre. Traditionally eaten straight from the pan and not on plates. This way you don’t over mix the congealed structure of the rice too much by agitation. Each guest starts at the perimeter of the Paella and works toward the centre. Lemon wedges are added to accent the flavor but again, it seems that the lemon was only added to adjust the flavour of one that has not cooked right! Personally, I am not a fan of lemon squirts, preferring to reserve it for Gin and Tonic or pancakes 🙂

So there you are! I am not even going to try to add a perfect Paella recipe here as I would be shot down in flames for adding something that should not be there or leaving something out which should. BUT, let us know if you have a tried and tested recipe which we can put out to the world and maybe one day, we should have a Great Spanish Paella Cook-Off?

Now there is only the wine left to find to wash it all down. I may go testing this week in the name of research you know 😉