Thermometers in Alicante reached 29.2 degreestoday! The highest registered in January in the city during the last 150 years : the last record being on January 7, 1982.

In fact, the maximum of 29.2 degrees in Alicante is 12 degrees above the normal average for the 1981-2010 period and is equivalent to what would be normal on a day at the end of June, declates the State Meteorological Agency (AEMET) on Twitter.

But the spring-like weather today has been noticed even more in Sagunto and Elche , with highs of 29.7 and 29.5 degrees, respectively.

In the city of Elche, with temperature data since 1948, no day in January had a maximum temperature as high as 29.5 degrees. Nor in Sagunto, since the record closest to it was 27 degrees on January 7, 1982.

This Thursday’s list of sizzling towns include Miramar and Pego (28.5 degrees) and Oliva (28.1), Xàtiva and Bétera (28). At the Alicante-Elche airport , 28.3 degrees is the highest in a month of January since this observatory began to record data in 1967.

The situation is, however, due to change on Saturday with the arrival of ‘ Justine ‘, that will generate a new wind storm during the weekend, with a moderate to strong west component and very strong gusts.

I can vouch for that heat… well toasted near the Arenal this afternoon!! 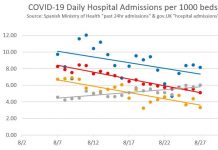