Filming The Stars in Javea, Denia and Moraira… More Glam’ and…

Since 1958, the cameras of the Silver Screen have been visiting Javea, Denia and Moraira to capture some of the wonderful backdrops this coastline offers.  Celebrity faces have often appeared, peeking over the Montgo, or even strolling down the Arenal. Indeed, not so long ago Matt Damon was seen having a cheeky pint in Achill and tapas in Aqua 😉

But I digress……. So from Raquel Welch to Bruce Willis….. here are a few of the movies filmed locally and some stories behind them.

The facilities of the Franco regime led to an avalanche of foreign productions throughout Spain and Javea benefited from this. It was one of the many places on the Alicante coast that hosted the filming of  Billy Budd ,  directed by Peter Ustinov, about the harsh living conditions in the British Armada of the 18th century. The film was shot on the high seas and the coast is not really recognizable, but if you pay close attention the profile of the Montgó can be distinguished.

This movie was made when:-

Terrence Stamp was a new sexy (but skinny) star discovery

Illya Kuryakin had not yet met The Man from Uncle…….and

In the summer of 1988, the Port and Les Planes de Xàbia were some of the backdrops used for this American comedy, starring Sex and the City girl, Kim Cattral and Airplane star, Robert Hayes.

Javea and Guadalest were two of the many towns in the Alicante region where this American comedy was filmed. Featuring Nia Vardalos, the unforgettable star of  My Big Fat Greek Wedding with a scene at the Miramar Hotel, in the heart of the port area of ​​the town.  Richard Dreyfuss also appeared.

Oh…. and the Gurka Palace had to put Greek signs up at the time!

The film is set on location in Greece and Alicante, including Guadalest and Javea.

Not one of Bruce’s best in my opinion but I know a bit more about this one than any of the others as the film crew were based up on La Guardia Park near the bar I owned at the time. They used to come and eat ( they had a huge capacity for Chilli con Carne and beer!)
I never had the pleasure of meeting Bruce, which was a big disappointment to me as I always kinda liked the twinkle in his eye ( amongst other things) but at the time that this was being filmed he was having one or 2 personal problems (according to the crew) and he was not in the mood for attending my quiz or karaoke night at the time!
I gleaned a bit more information from the loose-tongued crew over 2nd helpings of chilli as I wanted to know what Bruce was really like. They told me he is a good guy usually but not the their favourite actor. They said that the most charismatic and “normal” actor they had ever worked with was Matt Damon and that there was only one actor they refused to go on tour with…… yep…. Leonardo! ( the air went blue!!!)
Bruce and Sigourney Weaver stayed at the time in the Asia Hotel in Benidorm and were “dropped” by helicopter when required on set.
There was a Youtube link to the filming but it seems to have been removed
TAKEN 3 (2014) 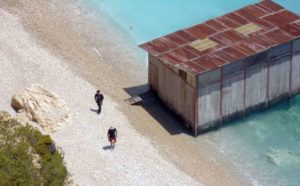 The Ambolo cove was chosen for some sequences of Taken 3 , an American production by Olivier Megaton starring Liam Neeson. The  star was then in Javea, although he was even more fleeting than Willis. The one with the hat walking on the beach in the image above is supposed to be Neeson.
Denia has also provided stunning backdrops for several movies in the past few decades.

Hollywood stars such as Raquel Welch, Faye Dunaway and  Christopher Lee,  have featured in films made in Denia.

Spectacular battle scenes of at sea have been filmed at the “Martillo” dock. Samuel Bronston’s mega production Captain Jones (1958) This required over 15 days for shooting scenes that included boardings, explosions, fires and shipwrecks. The confrontation between British and French fleets during times of Napoleon were depicted in H.M.S. Defiant.

The entire first stretch of the Raset area, now used for setting up outdoor tables of the port’s restaurants, was the setting for The Three Musketeers (1973) and The Four Musketeers (1974). Milady (Faye Dunaway) and Rochefort (Christopher Lee) met here to plot against the queen. Rachel Welch took a stroll here, accompanied by Michael York, Oliver Reed, Richard Chamberlain and Simon Ward.

ALSO….The Caribbean in The Son Of Captain Blood (1961)

THE OLD FISH MARKET was turned into the church of the city of Puerto Royal, where most of the story of The Son of Captain Blood  takes place, entirely filmed in Dénia. Some of the best set designers of the Spanish film industry participated in creating the sets for one of the most expensive films shot by the producer Benito Perojo.

Sean Flynn, son of Errol Flynn, played the role of the son of Captain Blood, the legendary character played by his father during the 1930s. The screenwriter was also the son of the original film’s screenwriter, Casey Robinson, also the scriptwriter of Casablanca.

The replicas of the 17th century galleons were expressly built in Italy for filming Captain Jones. After that, they were used in fifteen additional films, three of which were again filmed on location at Dénia’s harbour: The Son of Captain Blood, H.M.S. Defiant and Billy Budd.

Singapore in Krakatoa East of Java:

The interior of the Cooperative Wholesale Society was used as an indoor backdrop in Captain Jones and East of Java.

The Bermuda Triangle in Encounters In The Deep

The Mediterranean in Sound Of The Sea… and finally……………….

Thanks to La Marina Plaza

Statement from the Javea Mayor