I went expecting a landscape of mass tourism but, in the northern part of the Costa Blanca, I found quaint Spanish villages, and I found a part of Europe where life goes on the way it has for decades, with siestas religiously adhered to, and local customs and culture still very much a part of everyday life.

This part of Spain is undoubtedly one of the wealthiest in the country. Tourism earns considerable returns for the locals and property prices reflect the number of well-heeled northern Europeans who buy a second home in this tempting area. The weather has a lot to do with this. In the region’s main town, Denia, the sun is said to shine 320 days a year. 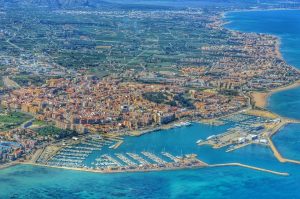 Denia
Denia’s skyline is dominated by the 18th-century Castillo de Denia. Not only does a trip to this honey-coloured fortress give you an insight into the region’s long history, the building’s grandness offers an excellent opportunity to get your bearings. Twenty miles of Blue Flag beaches extend from Denia to the north; head south and the rocky coves provide excellent scuba sites.

I loved Denia. It had the feel of being a real working town. With its pavement cafes, smart shops (wonderful fashion boutiques!) and bustling indoor market I felt as if I was in a small version of Nice. There’s just so much life about the place. Maybe that’s why the town celebrates more fiestas than any other in Spain – quite an achievement. The biggest is the Hogueras de San Juan in June. Similar to the Fallas Festival in Valencia, it features hundreds of huge papier måché sculptures, representing anything from politicians and celebrities to hot issues of the moment. These are set up in the main streets and squares, only to be set alight in spectacular bonfires on June 24 to celebrate the arrival of summer. The carnival lasts through the night and, although there is no rowdy behaviour or drunkenness, the party atmosphere is positively electric.

During July the town celebrates Santissima a Sangre, which celebrates the town’s patron saint and the blood shed by Jesus Christ. Events include infamous Toros a la Mar bull running around the seafront, in which young men run in front of the bulls before throwing themselves into the sea. The following month, in August, sees the Moors and Christians Fiesta. This Moorish ‘invasion’ is re-enacted every year with the accompanying canon- and musket-fire and the following day the Christians stage an attack and retake their castle with even more enthusiasm.

Well worth a visit is neighbouring Jávea, portside town of 20,000  ( well that has increased a lot since 2006!) which sits astride a hill. I loved wandering the narrow streets with old houses built from Tosca sandstone. They cluster around the 15th-century Gothic fortress church of San Bartolome. No high-rise buildings are allowed in Jávea which explains its attractive landscape.

Pueblo, the old village of Jávea, has made few concessions to tourism. Whitewashed houses surround the bay in the port, and it’s a great place to just sit in one of the outdoor cafes watching the fishermen bring in their fresh catches or watch the sailing boats set off from the marina.

I stayed in a villa near Jávea, set halfway between Jesus Pobre and Jávea old town, Casa Valls sleeps 10, has its own tennis court and pool and is surrounded by its own two-acre oasis of orange and lemon groves and tropical gardens. In early summer it costs £1,295 a week and even in July and August it is still available at under £2,000 a week.

Among the delights of this area are the scenic Orba and Jalón valleys – a pleasure for walking or touring by car.

Orba Valley
Running inland from Denia, the Orba Valley is home to the Girona river and charming, atmospheric little villages such as Tormos, Rafol, Benidoleig, Sagra and Pedreguer. These five villages are collectively known as the ‘Rectoría’. 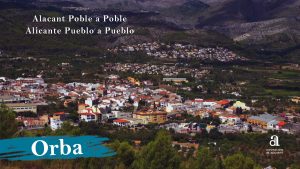 As I sat with a strong coffee in an even stronger sunshine in the tiny hamlet of Tormos I realised that this was the Spain I was hoping to find but didn’t dare count on. Old men sat in the street playing dominoes; women were conspicuously absent – apart from the industrious ones hanging out their washing on their balconies and spying on the menfolk below; children and dogs played in the squares and narrow streets. Located at the foot of the Sierra del Recingle, next to the Caval and Migdía Sierras, it is an excellent base for walking and the odd visitor that one does see is clad in suitable hiking gear .

The charm of the ‘Rectoría’ villages is that they remain totally uncommercialised. In an area still mainly devoted to growing fruit, the inhabitants are country people and proud of it. This is the place to head for a complete chill-out.

Jalón Valley
In the Jalón Valley, just to the south, the Gorgos river running through it is a striking feature and the road follows its twists and turns for several miles. The most attractive villages here are Llíber, Alcalalí, Parcent and Gata de Gorgos. Each has its own distinct character and its own unique specialist produce drawn from the surrounding countryside – wine from the vines, baskets from the reeds or honey from the orange blossom.

Llíber is the smallest village, with 498 inhabitants and, for me, it’s the most charming. I had lunch there in a cafe where, between my halting Spanish and the owner’s pidgin English, we managed a conversation about the local wine which is produced and marketed under the ‘Vall de Xaló’ label by the Virgen Pobre cooperative. Their pride is the Muscatel and after half a bottle you’ll know why. It’s perfect with the garlic mushroom, sardines and stuffed tomatoes you often find in this region.

Another beautiful place is the hillside village of Parcent. Head for the main square and enjoy a relaxed meal in the Co-Op – a place full of local workers enjoying a three-course meal with beer for €12 – then sit back and listen to the peeling bells of the Immaculate Conception church. Parcent is sleepy for most of the year, but certainly not so between August 10 and 14 when the entire village celebrates the feast of their patron saint, St Lorenzo.

is worth visiting for its crafts shops, though more business in cane and wicker goodies tends to be done on the plentiful street stalls than in the shops. The houses here, white with ivory lintels, give the village a specific character, and don’t miss the wonderfully ornate church which dates from 1535; the same year the village became an independent municipality from Dénia.

Is an enchanting medieval town. Located on the windy coastal road between Valencia and Alicante, its highlight is the ‘Cathedral of the Marina Alta’ which was constructed in the 1920s by pious local masons who relied their own physical strength and money. It served as a wonderfully cool haven on an otherwise baking hot day, but there was a quality about it – which had nothing to do with the shade it provided – that made me want to linger. Perhaps it was the abundance of art in a small, unprepossessing town, for here you find a truly magnificent altarpiece in honour of the venerable patron saint of the village, the Blessed Xiquet. Its detail is incredible. The church also houses a statue attributed to the famous 16th-century Spanish artist Juan de Juanes.

Explore the old quarter of Benissa starting from the Ayuntamiento -the former Hospital for the Poor – where you can see the beginning of the track used by the ancient ribereros (the workers who emigrated from Benissa to harvest rice on the Valencia coast). The houses here have ornate iron grilles on their windows and the floral display in the window-boxes are the cause of local rivalry. The result is a charming, photogenic little gem, reminiscent of the old parts of Granada.

Court orders the closure of cannabis association in Denia