The Valencian Association of Entrepreneurs (AVE) demands that the autonomous governments put pressure on Pedro Sánchez to recover all economic activity.

“Either we immediately reopen all shops, bars, restaurants, hotels, activities and companies, or the impact on employment and our welfare state will be dramatic.” was announced today, the Valencian Association of Entrepreneurs (AVE), which is chaired by Vicente Bolud, and whose board of directors incudes the president of Mercadona, Juan Roig.

In a statement, AVE defends “the necessary return to economic activity “, while guaranteeing all safety and health measures for the staff. “We are committed,” the businessmen insist, despite the fact that the Sánchez government has already made it clear that the de-escalation will be progressive and the total return to normal is far from yet being achieved. Moreover, the Government has come to consider the possibility that sectors such as hotel and tourism will have establishments closed until the end of the year.

It is true that companies pushed for the end, as soon as possible, of the obligatory economic hiatus that only those dedicated to essential activities in this coronavirus crisis are left operational. But the demand now to return to full economic activity is clear: “It is essential to return urgently to economic activity, because the stoppage is seriously affecting tens of thousands of companies and workers who, if they are still prevented to return to their activity, they will have to close “.

“Our leaders must facilitate that thousands of Spaniards who want to carry out their projects can do so. We Spaniards do not want to be mere spectators, ” insists AVE, who urge the autonomous governments to put pressure on the central executive along this line. “We encourage regional governments to ask the Government of Spain, with courage and determination, to open shops, bars, restaurants, hotels, activities and companies, complying with all the necessary safety and health measures, and to which we we commit .”

“Entrepreneurs, whatever their size and sector, along with their workers, are the ones who will get us out of this crisis and cannot be singled out by our public officials as the enemy, ” says AVE in its statement.

In addition, in order to facilitate the opening of companies, the association demands “to eliminate bureaucratic obstacles” and to apply “urgently” two measures: “the generalised positive administrative silence and to start the activity with responsible declaration”. And, as has been customary on AVE, he once again calls for political agreements and consensus “leaving aside partisan interests.”

Lastly, and in the midst of a wave of public spending to fight the effects at all levels of the coronavirus crisis, AVE demands “rationalisation and reduction of the unnecessary costs and duplication that exist in public administrations “. In other words, administrations adjust their belts. 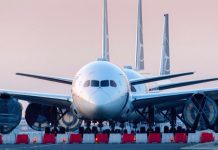