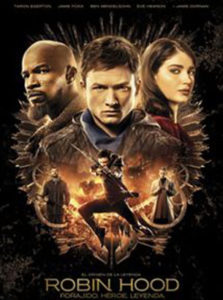 When the young Robin Hood (Taron Egerton) returns to his home, hardened, after fighting as a warrior in The Crusades, he discovers a kingdom in which corruption is the currency of the English crown. At that time, along with his partner Little John (Jamie Foxx), he makes the decision to form a band of bandits and lead a bold rebellion in which they will face the evil Sheriff of Nottingham (Ben Mendelsohn).