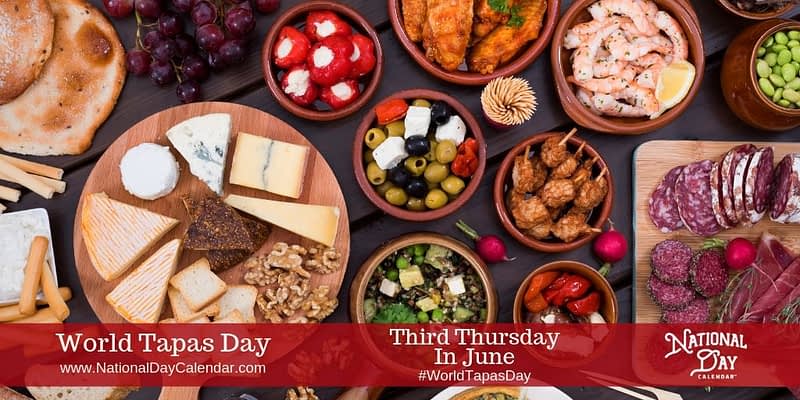 History of the Annual Celebration

In 2016, Turespaña, Spain’s tourism agency, declared World Tapas Day on the third Thursday in June to celebrate Spain’s cuisine of miniature plates and menus with the world.

The origin of Tapas is claimed by several – take your pick… 😅

It is said that Tapas originated in Andalucia. The word “tapa” translates as “cover”. Tapas traditionally may have been a complementary piece of sliced ham served on top of a glass of wine, but we know them today as small portions of food commonly served as a snack before lunch or dinner.

But one of the most popular stories claims that, back in the 13th century, King Alfonso X of Castille found that, while he was recuperating from an illness, he could only eat and drink in small amounts – resulting in one of the first forms of tapas.There is something profoundly satisfying about enjoying a small morsel of something delicious alongside a cold drink

His Majesty thought this was marvellous and, on his recovery, decreed that all drinks should be served with a small snack.

Another story states that his much later 19th-century namesake, Alfonso XIII, once ordered wine in a popular tavern in Cadiz.

Since Cadiz can be very windy and dusty with it, the bartender kindly served it with a slice of ham on top to keep the sand out.

The king enjoyed his wine and ham so much, he ordered the same again and, as is often the way with kings, in doing so started a trend.

Other origin myths are more humble. According to some, tapas began at a farmers’ bar in Seville where the bartenders would serve beer or sherry with a saucer on top to keep the flies out.

Then they realised that they could use the saucer to serve a little ham, some olives, some cheese. The clever move made customers come back, thanks to the bar’s apparent generosity.

Tapa literally means “a cover” or “a lid” – and this is a common facet to many tapas origin stories. One says that, since tapas bars used to be standing-only affairs, people who ordered a snack had nowhere to put their plate but on top of their glass – hence the tradition.

Another claims that some sneaky tavern keepers discovered that, if they covered cheap wine with a plate of strong cheese, their punters, in a state of olfactory confusion, wouldn’t notice how bad the beverage was.

In today’s world, this means little: these days, we don’t need bartenders to keep the flies off our drinks. But even so, tapas’s influence has spread the world over.

The tapa, considered by some to be the epitome of Spanish cuisine and a culinary creation that inspires friends to come together and share small morsels of tasty food accompanied by a drink, is to be celebrated by chefs and enthusiasts worldwide.

OVERVIEWFilm based on Disneyland’s theme park ride where a small riverboat takes a group of travelers through a jungle filled with dangerous animals and reptiles, but with a supernatural element. DURATION 127 min COUNTRY United[...]
View Calendar